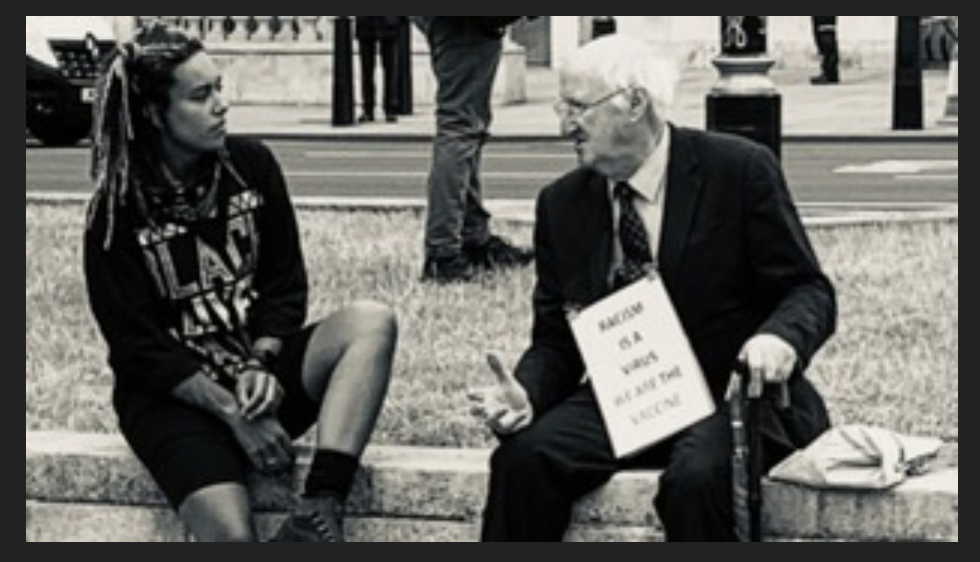 ShareIntroduction by Gilad Atzmon: I found this morning that British Jewish pressure groups once again defame British anti racists. Today it is, Rosie Smith, a Black Lives Matter activist and Jim Curran, an old truth seeker. Curran is guilty of attending Keep Talking meetings, a discussion group that discusses the undiscussable (9/11, the Holocaust, Rothschild etc.).According to the Jerusalem Post, Keep Talking is also guilty of inviting yours truly to to discuss he Balfour Declaration. I am once again falsely accused of spreading ‘conspiracies’ and ‘holocaust denial’ no less no more. Here is my Balfour declaration talk. You won’t find tere ‘Holocaust denial’ or ‘conspiracies,’ just properly sourced materials referenced to Jewish and zionist publications. I can only be thankful to the Zionist alliance for referring to my work on the Balfour as i am proud of this lecture in particular. Original post: https://gilad.online/writings/2017/11/8/the-balfour-declaration-one-hundred-years-of-goyim-solitude Sharehttps://youtu.be/HV59K-u5kuUIn this talk Atzmon elaborates on that which the historicity of Balfour is set to conceal -- a century of Jewish political hegemony in Britain and beyond.  Keep Talking, London 7.11.2017

The Balfour Declaration - One Hundred Years of (Goyim) Solitude 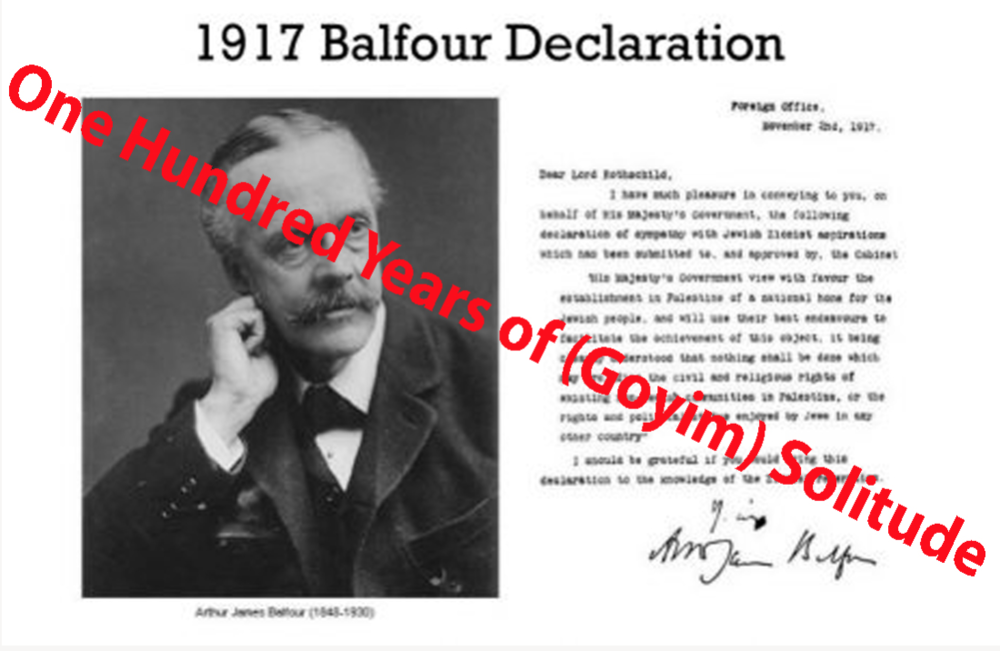 A talk given at Keep Talking gathering in London,  7 November 2017 By Gilad AtzmonIn Heidegger and the Jews, the French philosopher Jean-Francois Lyotard points out that history claims to narrate the past but, in practice, what it does is conceal our collective shame. The Americans conceal slavery and imperial genocidal aggression, the Brits conceal their colonial blunders, the Jews turn their eyes away from anything that may have contributed to turning  Jewish history into an extended shoah. The real historian, claims Lyotard, is there to unveil the shame. This week marks 100 years since the Balfour declaration and today I will try to touch upon your shame, my shame, our shame. We will try to figure out what the history of the so-called  Balfour ‘Declaration’ is there to conceal.Let’s first examine the document. Most noticeably the so-called ‘declaration’ is not printed on official British government letterhead. It is not signed by the British cabinet either. It is, instead, a letter from a sleazy British politician  (Foreign Secretary Arthur Balfour) to a very rich Jew (Lord Walter Rothschild). As such, the Balfour ‘declaration’ is actually a statement  with somewhat limited significance.  What it does is  “declare[s] sympathy with Zionist aspirations.” 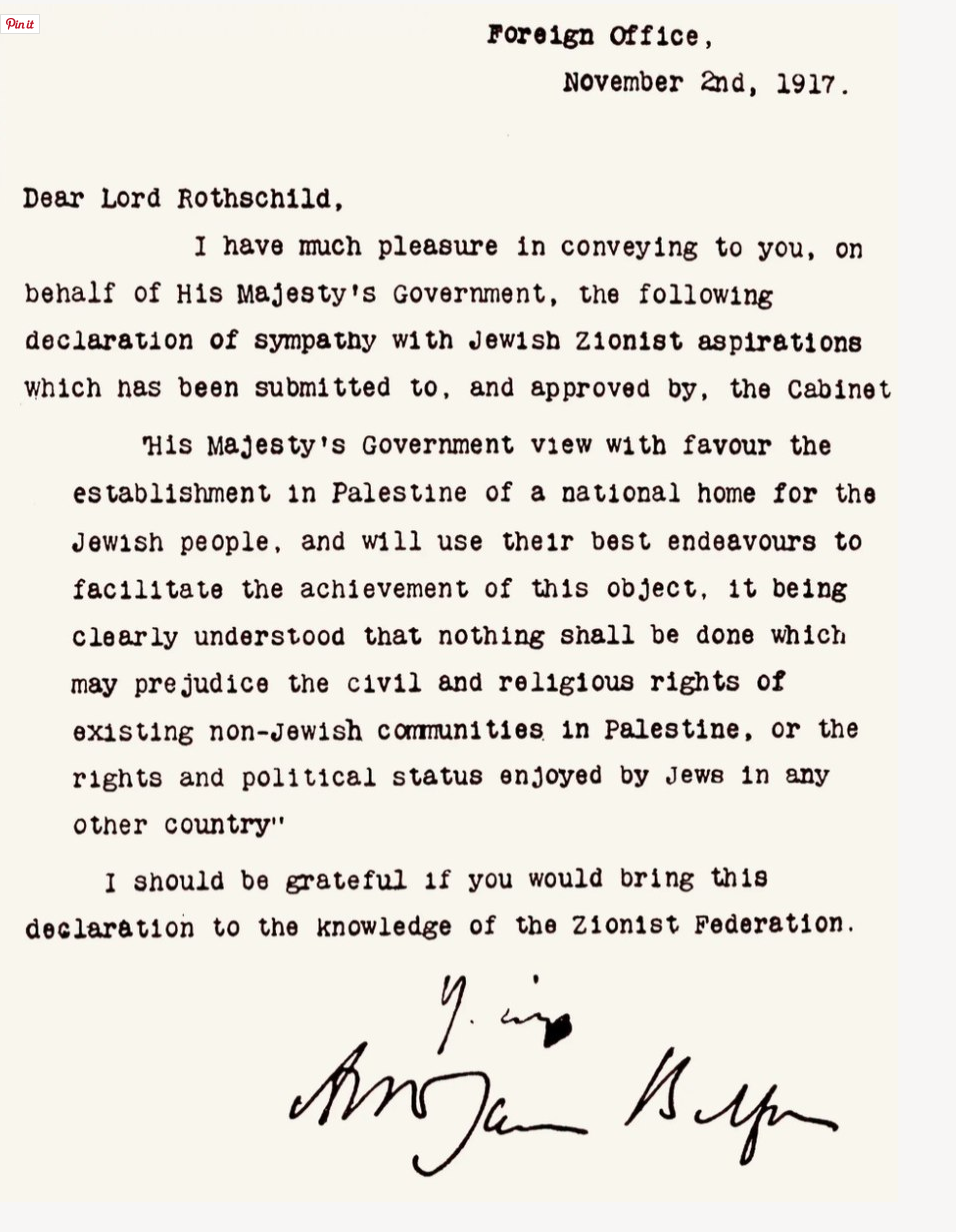