Bibi, Pfizer and the Election 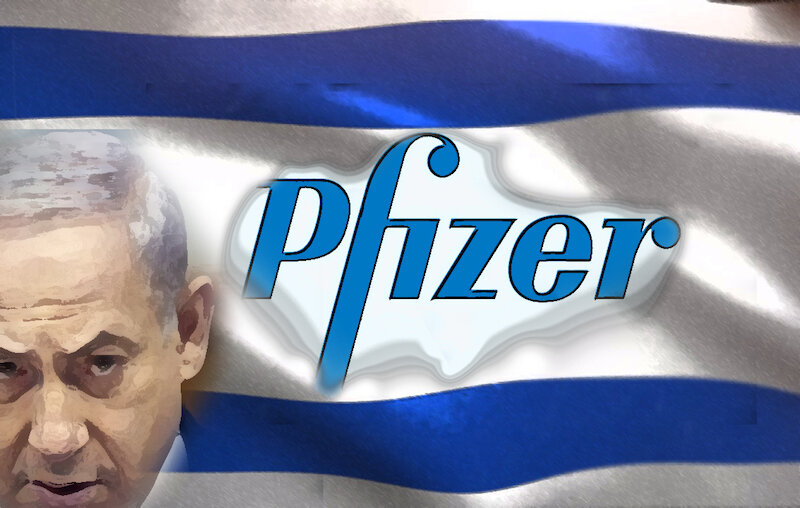 By Gilad AtzmonShare Israel’s biggest news outlet Ynet reported a few hours ago  that in the country voluntarily making itself Pfizer’s testing ground,  “75.4% of those diagnosed yesterday were under 39.  Only 5.5% were over 60. “The number of critical patients dropped to 858 - the lowest since January 4. However, this number is more than double that in mid-December, just before Israel started its ‘pioneering’ experiment in mass vaccination.  Ynet reports today that “In Israel 59.9% of critical patients are over 60 years old. 18.2% are aged 50 to 59. In addition, 10.8% are aged 40 to 49 and 7.5% are in their 30s. As of today, more than a third of critical patients are between 30 to 59 years old.” The meaning of the above can hardly be denied or at least demands immediate attention. The country that leads the mass vaccination contest reports a radical shift in the nature of the pandemic. It doesn’t take a genius to suspect that there may be a correlation between the mass vaccination campaign and the growing vulnerability of younger age groups including new-born and pregnant women. The biology here is also far from being too complicated. The virus that initially preyed on the elderly and vulnerable has morphed by means of mutation and is now fit enough to attack other segments of society and particularly younger age groups. Up to the 20th of December, the day Israel launched its mass vaccination campaign the country had logged 3,074 deaths. In less than two months of ‘successful’ mass vaccination that number almost doubled. As of writing this article, it stands on 5,526. This spectacular rise in deaths (80% in less than two months) occurred when the country was in lockdown, hence it wasn’t exactly ‘social gathering’ that helped the virus spread. The only thing that was spreading in Israel in these two months was the Pfizer vaccines and the so-called British mutant that is apparently more popular in Bnei Brak than in Kent. The inevitable question here is whether there is a connection between vaccination and mutants, but this is the one question no one is allowed to ask in Israel.In November 2020 Israeli Health Ministry data revealed that Israel detected 400 cases coronavirus under the age of two. By February 2021, that number grew to 5,800.  We are dealing with a clear rise of about 1300%, impressive indeed. Israeli Ynet reports that this kind of rise in numbers of new-born Covid-19 morbidity are reported around the world, I investigated it but didn’t manage to find any confirmation that this is indeed the case.  In Britain, for instance, all I find is reports on a ‘Covid-19 baby boom’ and some concerns regarding a rise in child obesity. In fact, nobody reports on a rise of 1300% in new-born Covid-19 except Israel. I am not in a position to determine what led Israelis to make themselves into guinea pigs for a pharma giant with a dubious safety and ethical record. The possibility must be considered that in Israel the success of a mass vaccination campaign could be Netanyahu and his party’s primary ploy ahead of the coming election. Netanyahu faces a serious legal battle, and winning the election extends far beyond politics for him. It is an existential survival battle. I believe Bibi had to choose between war with Iran and a Pfizer vaccine. He had good reason to assume that Pfizer is by far a better and more peaceful option.Netanyahu probably gathered that a successful mass vaccination campaign would secure his victory. This was indeed a reasonable consideration on his part, and it may prove to be correct. It is worth mentioning that not one of Netanyahu’s political opponents on the evaporating Israeli Left or centre dare challenge Netanyahu’s vaccine policy. More so, not one Left-wing institution in Israel has stood up for the many Israelis (currently more than 50%) reluctant to be vaccinated.  Not one politician took their side and stood for their elementary rights. Meanwhile, the government is desperate to make sure that the entire nation is vaccinated. The government won’t hesitate to introduce totalitarian measures.   The Jerusalem post reported today that “a green passport will be required to enter certain places and to participate in certain activities. Only people who have been vaccinated or have recovered from coronavirus will be eligible for one. As part of the program, registered gyms, theatres, hotels, concerts and synagogues will be able to operate starting next week.” Israel already signed agreements with countries that will open their gates solely to the Israelis who carry green passport.One may wonder why the Israeli Government is so obsessed with vaccinating the entire population, including the youth, army and other segments that aren’t necessarily high-risk. One possibility is that the Israeli government knows by now the real implications of the vaccine. Israel can’t turn a blind eye to the 1300% rise of Covid-19 cases in new-borns. They also can’t ignore that the number of Covid-19 deaths since the vaccination campaign started equals that of IDF fatalities in the 1973 Yom Kippur War, a war the country is still traumatized by.It is possible that Israeli leadership now acknowledge the fatal mistake it has made distributing the vaccine widely. It may be plausible that the only solution they could come up with is vaccinating the entire population, hoping that this may provide at least temporary protection, which may last until the March election date.If there is any validity in my dark depiction of the Israeli reality, it is reasonable to conclude that with Bibi at the helm and Pfizer with a needle, Israelis do not really need enemies.
URL:
Bibi, Pfizer and the Election
Feed item Author:
Gilad Atzmon