We Are Change A request filed by Jeffrey Kaye through the Freedom of Information Act resulted in a 128 page declassified document. It illustrates that the CIA not only has a long history of engaging in torture and interrogation tactics. They also guide others to become the best interrogator possible. NSA archives also contain this document which states interrogations harnessed foreign intelligence during the Cold War era:

The pages go on to describe how an interrogation is best carried out, from beginning to end. Details include information on when to inflict pain, how to threaten, and properly incarcerate your prisoner.

All of this was highly illegal at the time. The document makes no effort to hide the fact that what they were doing was against the law. Kubark, a pseudonym for the CIA described the illegality of their practices in the text below:

The fact that the CIA had no legal authority to conduct these interrogations, it didn’t stop them from being carried out. In fact, there was a system set in place for a prospective interrogation to become approved. (#3 is blank on the released document):

The Qualifications of Being a Successful Interrogator

Sympathy is one of the leading qualifications to torture somebody. This paragraph goes on to describe the “four qualifications of chief importance” to becoming an interrogator: “(1) enough operation training and experience to permit quick recognition of leads; (2) real familiarity with the language to be used; (3) extensive background knowledge about the interrogatee&#8217;s native country (and intelligence service, if employed by one); and (4) a genuine understanding of the source as a person.” The document goes on with more detail:

CIA agents that were among the first to take part in an interrogation were assigned to &#8220;guard duty&#8221; and &#8220;supplementary tasks&#8221;. Before taking on the role as a lead interrogator they were required to &#8220;view the process closely before taking charge.&#8221;

Another one of these personality types, “The greedy, demanding character” was listed as someone who may commit suicide as a result of the interrogation:

The Setting of a CIA Interrogation

The document below shows how to properly set up an interrogation room and the interrogation itself. Showing that a lot of thought and practice methods were applied. Described in the document is one method of torturing victims by forcing them to stand for lengthy periods of time: 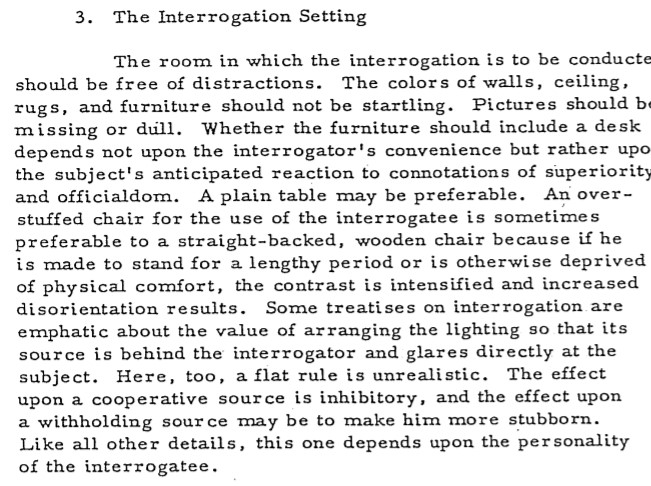 The document then goes on to say that a “Do Not Disturb” sign or something similar should be considered for use. That telephones should be unplugged. Recording and photography devices should also be concealed and turned on somewhere in the room.

Other Interrogation Tactics Described in the Document

Described below are tactics learned by CIA agents. To get an interrogatee to talk without resorting to coercive measures. The agents would implement conversational and manipulative techniques. These methods of &#8220;homeostatic derangement&#8221; pain, narcosis and sleep loss were the physical aspects of the interrogation.

Notably the CIA considered the threat of pain is more prudent than the act of torture itself. On pages 90-91 it states, “the threat to inflict pain, for example, can trigger fears more damaging than the immediate sensation of pain… whereas the materialization of the fear, the infliction of some form of punishment, is likely to come as a relief.” In other words, the CIA document claims that many people have a higher tolerance for pain than they imagine. That any sort of violent act will immediately help them realize the pain is not that bad. They should hold out. As a result, psychological and conversational manipulation were considered effective means of interrogation. However, this is not to say that pain is never used as a tactic. If pain is never used, they wouldn’t have listed so many reasons why it should be avoided:

The information on page 95 suggests hypnosis is a serious technique.  Psychologists, psychiatrists or M.D&#8217;s where the professions of choice as it &#8220;it can produce irreversible psychological damage.&#8221; This isn&#8217;t to say that it was never used.

Individuals interrogated by CIA agents were also put under the influence of drugs. Described on page 100, is to cause “psychotic manifestations such as hallucinations, illusions, delusions, or disorientation.” Before we can take a guess as to what this substance or substances are, the document is quick to shoot down an opportunity to name them for us:

Before ending with a set of sources and an index. The document concludes by giving us a basic rundown on the coercive interrogation tactics. These conclusions touch upon many of the methods described above, such as pain, hypnosis, and narcosis, along with others. 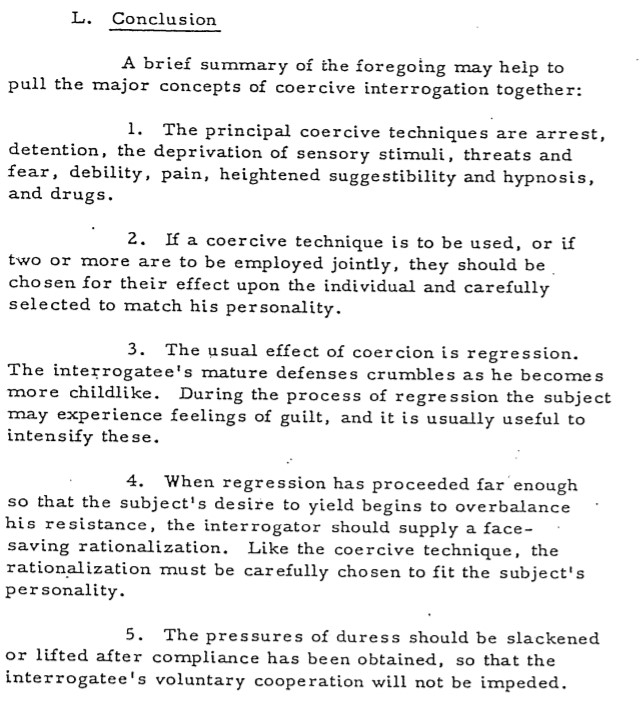 The post CIA Declassified Document: A Torture Manual? appeared first on We Are Change.

A request filed by Jeffrey Kaye through the Freedom of Information Act resulted in a 128 page declassified document.

It illustrates that the CIA not only has a long history of engaging in torture and interrogation tactics.