Reading Time: 6 minutesCOVID-19 is ravaging the world, and with India’s poorly implemented lockdown, not only has the country lost lives, its already ailing economy has now gone into freefall. Under normal circumstances, India’s 450-million-plus labor force is considered an asset. Yet the government’s badly handled COVID-19 lockdown has caused large-scale labor distress, especially to the poorest and most marginalized workers, who make up about a quarter of that number.  According to the best estimates, more than 7.5 million workers have returned home by trains and buses that were eventually mobilized by the government. But before that could happen, millions took matters into their own hands and walked home, some to villages hundreds of miles away.  Experts predicting the impact of COVID-19 on India’s economy paint a dismal picture, especially with a recent spike in the number of cases. In this scenario, ratings agencies, as well as the World Bank, foresee large-scale damage to the world economy. Advanced economies are likely to contract by up to 7 percent, while agencies like S&P and Fitch see India’s economy shrinking by 5 percent.    In May, Prime Minister Narendra Modi announced a $260 billion stimulus rescue package, but it failed to address the emerging humanitarian crisis represented by the millions of workers who have lost their jobs and have no assurance of returning to work any time soon.

When the coronavirus hit, a vast labor pool, many of them poor migrants working in cities or other industrial/commercial hubs far from their own homes, were left with no jobs, no income, and no means to pay rent or buy food. This precipitated a mass exodus, the largest since India’s Partition in 1947. However, with interstate borders closed and transport shut down, including railroads — India’s most common form of mass transportation — many started walking or cycling hundreds of miles, carrying their possessions, children, and the elderly. Some managed to hitch rides on trucks delivering essential goods, or hide in container trucks and construction equipment.

With COVID-19 cases going up, the huge number of returning migrants in India will precipitate a dual economic crisis, driving wages down, and causing huge unemployment in their home states.

Hundreds died. These deaths — from exhaustion, starvation, accidents, police brutality, communal violence, lack of medical attention, suicide, and more — will likely never make it into the official statistics. For now, they are being compiled by civil society volunteers.  Six weeks after the lockdown was enforced, after denials of any migrant crisis, followed by wrangling about who would pay for the rescue effort, and after the Supreme Court weighed in, the government organized trains to take the workers back. But because of inadequate food, water, and hygiene facilities, more people died.  With COVID-19 cases going up, the huge number of returning migrants will trigger a dual economic crisis, driving wages down, and causing huge unemployment in their home states, said Professor Jean Drèze, social scientist and activist, at a webinar on migration organized by the Jesuit Resource and Response Hub (JRH).  “The central government has been consistently unable to anticipate the next crisis,” he said, “and now there is a danger of not anticipating the crisis of survival and livelihood in the poorest states in the next few months.”

As the country begins to emerge from its seven-week lockdown, many states, including Uttar Pradesh, Madhya Pradesh, Gujarat, and Punjab, have announced the relaxation or suspension of labor laws, including those regulating wages, conditions of work, overtime, annual leave, social securities, and the resolution of disputes. In short, the suspensions appear to be sacrificing labor rights for business interests.  The prevailing belief is that relaxing these laws will increase investment by making it easier to do business and reducing labor market “rigidity,” thereby creating more jobs and pulling the economy out of a recession.  Professor Shyam Sundar, a labor economist from Xavier School of Management in Jharkhand, dismisses this theory.  Speaking at the webinar on migrant workers organised by the JRH on June 3, Sundar said, “This has been an unsubstantiated view … promoted both by employers and global financial institutions like the World Bank and IMF.” Persisting with it will lead to a “race to [the] bottom of labor standards” instead of promoting sustainable economic development. “Good capital will chase countries with labor standards,” he said. 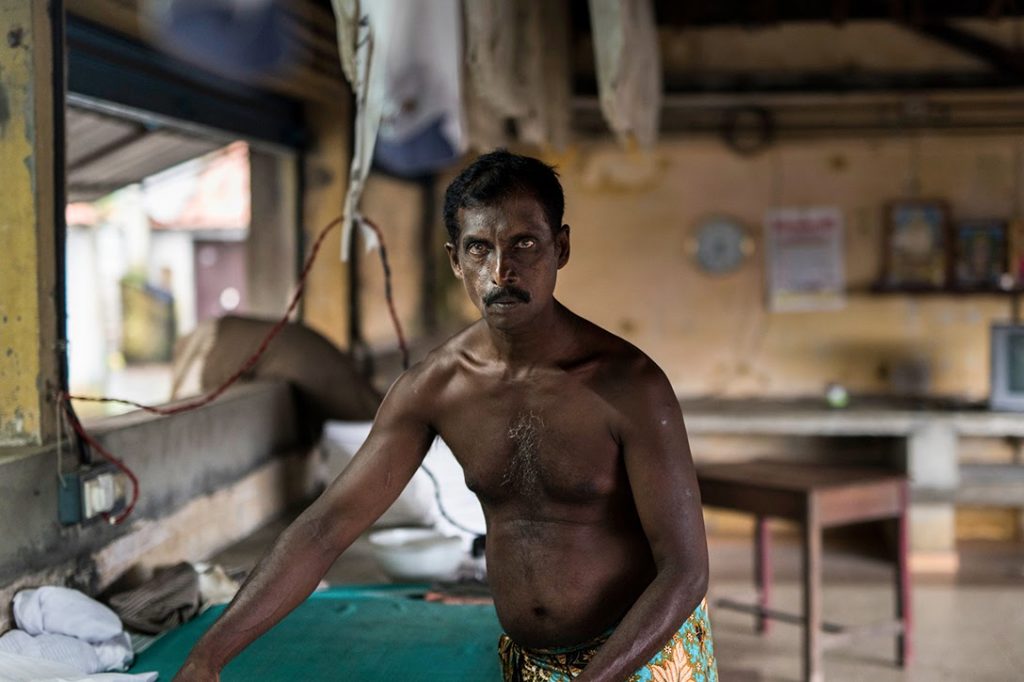 India: Among the Hungriest in the World

The situation was less than promising even before the COVID-19 lockdown forced India’s economy to a screeching halt. GDP growth rate figures for the financial year 2019–20 had dropped to 4.2 percent, an 11-year low — and this was just one week into the lockdown.  The unemployment rate reached a 45-year high of 6.1 percent in 2017–18, according to the National Sample Survey Office’s periodic labor force survey, which the government tried to suppress.  “For the first time, poverty levels have gone up,” said Ritu Dewan, the retired director of the Department of Economics, University of Mumbai. India now ranks 102 out of 117 countries in the Global Hunger Index. That is worse than neighbouring countries like Pakistan (94), Bangladesh (88), Nepal (73), and Sri Lanka (66).  The overall verdict is that India is likely to experience its worst recession in 40 years. A report from the Confederation of Indian Industries says, “We expect GDP growth to lie between -0.9 and 1.5 per cent for FY2021.” Added to that is the human cost of the pandemic, with more than 400,000 cases and over 13,000 deaths so far. The awkwardly implemented lockdown has killed hundreds more.  In rural India, workers are also covered by the National Rural Employment Guarantee Act (NREGA), which is a social security measure that gives rural residents a guarantee of 100 days of wage employment in a year in unskilled manual labor. Though the wage rates are low, Drèze was of the opinion that to reduce unemployment in rural areas, the plan has to be aggressively pursued. Anuradha Talwar, a state committee member of the Paschim Banga Khet Majoor Samity (West Bengal Agricultural Workers’ Union), who works with agricultural and tea garden workers, told WhoWhatWhy that decentralization is key to boosting local economies. “Agriculture [especially] has the capacity to absorb a lot of labor,” she said. “If there is investment in agriculture, it is capable of providing employment much faster and much more cheaply than industry … [But] I haven’t seen any kind of push for agricultural growth or rural growth … Agriculture is being looked at [in terms of] corporatization, land pooling, one-market — basically a very capitalist way of thinking.” It may not be as lucrative as a city job, she added, but it is more stable and definitely environmentally friendlier. Rakhi Sehgal, a labor activist who works with garment and automobile workers in Gurgaon, pointed out that even before the lockdown, factories had been letting go of workers. In response, some states have ordered an increase in total work hours per day. But with consumer demand slowing down, she said, what is the point of mandating 12-hour shifts?.

Last Flight out of India

The government is also attempting to push through a new Environmental Impact Assessment notification policy, which would exempt certain industries from getting environmental clearances before initiating large scale development.  But opponents cite what happened in Assam’s Tinsukia district on May 27. A clearance for oil drilling, fast-tracked during the lockdown period, resulted in a massive explosion. After about a week of “uncontrollable leaking” of oil and natural gas, the well caught fire, resulting in “almost irreversible” damage to nearby Dibru-Saikhowa National Park. The park, located less than a mile from the fire, is a treasure of biodiversity, housing over 750 species of fauna. Environmentalists and locals have been calling for a ban on oil drilling in this region for over a decade.

Nonessential expenditure must be stopped, and small and medium enterprises be provided subsidized or free raw material to offset disruptions in the supply chain. —Ritu Dewan, economics expert.

“What we have now is a case of disaster capitalism,” Sundar said, “which often is the case after a [humanitarian] crisis.” In the best case scenario, he speculates, the aftermath of the pandemic and resulting economic crisis will bring about long-term changes in food and health security, and better labor rights, leading to a fundamental change in how the economy operates. At worst, he says, there will be further labor shortages and increased exploitation. Talwar argues that the key to economic recovery is to put food and money directly into the hands of people through expansion of “the Public Distribution System [India’s food security program] and direct cash transfers.”  Dewan, an economics expert, agreed, adding that nonessential expenditure must be stopped, and small and medium enterprises be provided with subsidized or free raw material to offset disruptions in the supply chain. Plus, greater investment in public health will be essential.  “It is time to say goodbye to fanciful projects like bullet trains,” Sundar said, “and to reallocate these resources from elitist development projects to the popular development projects.” Related front page panorama photo credit: Adapted by WhoWhatWhy from World Economic Forum / Flickr (CC BY-NC-SA 2.0) and Stephen Cysewski / Flickr (CC BY-NC 2.0). The post The COVID-19 Toll in India: Displaced Workers, Falling Wages, Disappearing Jobs appeared first on WhoWhatWhy.
URL:
The COVID-19 Toll in India: Displaced Workers, Falling Wages, Disappearing Jobs
Feed item Author:
Payal Dhar
Reading Time: 6 minutes

COVID-19 is ravaging the world, and with India’s poorly implemented lockdown, not only has the country lost lives, its already ailing economy has now gone into freefall. Under normal circumstances, India’s 450-million-plus labor force is considered an asset." data-share-imageurl="" style="position:fixed;top:0px;right:0px;">