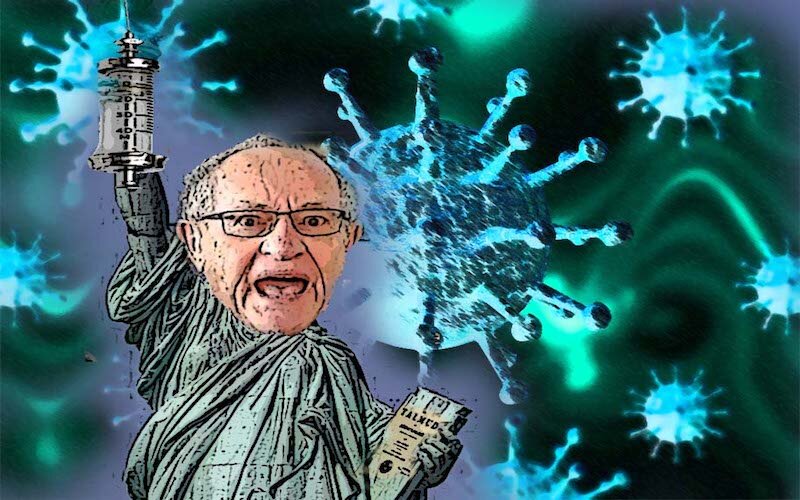 By Gilad AtzmonShareAmericans may be surprised to learn from Alan Dershowitz that their constitution is far more intrusive and oppressive than what they and their forefathers have believed for generations. The law ‘scholar’ declared yesterday that “you have no (constitutional) right to not be vaccinated." Watch Video: You Have NO RIGHT to NOT be Vaccinated" - Alan Dershowitz:https://youtu.be/bLbp2uw5sZQ﻿ One possible explanation for Dershowitz’s peculiar constitutional ‘interpretation’ is that some parts of the American constitution were actually written in Yiddish, Hebrew and Aramaic. As such, their meaning is only accessible to a small privileged segment within the American population, one that amounts to 2% or less. But there is a far better explanation that shines light into the ‘reasoning’ offered by Dershowitz.   In a spectacularly brave Huffpost article titled What Is Pilpul , And Why On Earth Should I Care About It? author David Shasha writes, “ Pilpul is the Talmudic term used to describe a rhetorical process that the (Jewish) sages used to formulate their legal decisions… It is a catch-all term that in English is translated as ‘Casuistry’.” The English word ‘casuistry’ is defined as: “the use of clever but unsound reasoning, especially in relation to moral questions; sophistry.” Dershowitz, is a pilpul master. He often employs peculiar reasoning in relation to moral questions especially when it comes to his own morality and conduct. Shasha writes of the history of pilpul tradition that “the Ashkenazi rabbis were less concerned with promulgating the Law transmitted in the Talmud than they were with molding it to suit their own needs. Pilpul was a means to justify practices already fixed in the behaviors of the community by re-reading the Talmud to justify those practices.” Pilpul, as described, is not about understanding of the law and its meaning but about the deliberate miss- interpretation of the law so it fits with one’s core interests.  Shasha points out that “even though many contemporary Jews are not observant, pilpul continues to be deployed. Pilpul occurs any time the speaker is committed to ‘prove’ his point regardless of the evidence in front of him. The casuistic aspect of this hair-splitting leads to a labyrinthine form of argument where the speaker blows enough rhetorical smoke to make his interlocutor submit. Reason is not an issue when pilpul takes over: what counts is the establishment of a fixed, immutable point that can never truly be disputed.” Pilpul is basically a legalistic exercise that is removed from truthfulness, ethical thinking or even logic. What we see from Dershowitz is a dramatic pilpul-ization of the American legal culture and ethos. “In this context,” Shasha continues,  “the Law is not primary; it is the status of the jurist. Justice is extra-legal, thus denying social equality under the rubric of a horizontal system. Law is in the hands of the privileged rather than the mass.”In a pretty accurate description of Dershowitz’ modus operandi Shasha writes, “Pilpul is the rhetorical means to mark as ‘true’ that which cannot ever be disputed by rational means.” Shasha, obviously had Dershowitz in mind when he wrote his Huffpost article. But Dershowitz is not the only one. In Shasha’s article Noam Chomsky is equally guilty of pilpulism. “The contentiousness of the Middle East conflict is intimately informed by pilpul. Whether it is Alan Dershowitz or Noam Chomsky, both of them Ashkenazim who had traditional Jewish educations, the terms of the debate are consistently framed by pilpul. What is most unfortunate about pilpul — and this is something that will be familiar to anyone who has followed the controversies involving Israel and Palestine — is that, since the rational has been removed from the process, all that is left is yelling, irrational emotionalism, and, ultimately, the threat of violence.”I agree with Shasha. The Middle East conflict has been reduced into a pilpul battle ground between Zionists and their Anti Zionist Zionist twins.  The question for Americans is whether Pilpul, a Jewish Ashkenazi litigious practice that is removed from truthfulness, ethics and reason should interfere with American’s constitutional rights, way of living, politics, culture, spirit and vaccination policies.